Ebay.  What did costumers do before there was ebay?

I’ve nearly completed my first steampunk outfit (the more dressy geisha/kimono one) and now I’m thinking ahead to the second.  I’m planning on attending the first annual Steamcon, and I’ve got to have at least two outfits, seeing as how it’s a three day affair!  (With a concert by Abney Park, yay!)

So I went onto ebay in the search of some required props for my second outfit (the airship pirate).  Here’s what I found, and won: 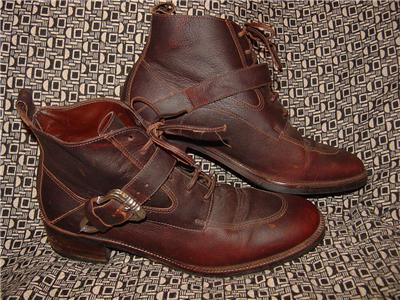 I’ll totally wear these in Real Life, too.  I love them.

Here’s what the seller (from Tibet!) had to say about his product:

This is a rare occident manner crystal pocket watch. It was made of crystal and copper. You can read the time from the pointer and set time from front. But it goes well, it was made of height quality crystal and copper. This is very rare the time. Because this is very difficult to do at the time. You can see the shape of very beautiful. In time it only use rich family, Please take a close look at my pictures. If you like pocket watch, please don’t miss the chance to get it! Enjoying your Bidding!

I love descriptions by people who don’t have English as a first language.  “You can see the shape of very beautiful…” It sounds like poetry.  Also, because I don’t think this seller has ever heard of steampunk, he didn’t use it as one of his tags in the auction.  Hence, even though it is packed with gears and extremely steamy, I got it for a steal, with no one bidding against me.

This is an ancient Chinese-style lock.  It’s functional.  I’m not sure how I’ll use it yet, but it’ll fit in a costume somewhere!

I like crossbows.  I like pistols.  I think if I steampunk this up a bit, it’ll fit perfectly with my persona.  Much cooler than a modified Nerf gun, because everyone seems to have one of those!  Also, at some point (maybe Halloween?) I’m going to do a vampire hunter costume, and this would so work for that as well.  Plus, it was only $9.  And it shoots, so I can have some fun with it, before I mod it up.

Can’t wait for my parcels to start arriving….

Well, thanks to my friend Bonnie (who I hope is feeling better!), I have this mindboggling youtube timewaster.  Yup, that’s my favorite sort of internet thingee!

I’m currently obsessed with genealogy, but even before I became obsessed with Ancestry.com, I wanted to know more about my Great-Grandmother Merritt.  I’ve always felt a sort of affinity with her, even though she died before I was born.  I’ve collected several family heirlooms that were hers.  But I was never able to find out more about the Merritt family’s origins – the only thing I had was the name of her father, and I could find out nothing about him.  It was deeply frustrating.

But then I was cruising ebay, and I found this guy:

He offers 2 hours of professional genealogy research for a starting bid of $3.  You can’t beat that!  So I won my auction, and put him to work.  So far, he’s worked one hour, and traced the Merritts back five generations!  Very, very cool.  I may have to purchase some time later at his normal wage of $12 an hour and have him solve another problem that’s been bugging me.

In my own genealogy research, I’ve found I’m direct-blood related to King John I of England (he of Robin Hood infamy), King Duncan I of Scotland (he who was murdered by MacBeth), and Charlemagne.  I’ve also got a family line of Stuarts, and it turns out I’m some sort of cousin to Robert the Bruce (his daughter married my ancestor’s brother….)

What else is cool?  Oh yes.  I’m past the 100,000 word mark in Arassa!  Now I can only hope I reach the The End soon.  I don’t want to write another massive book after the last one I wrote (which was so huge I broke it up into two novels, and they were still on the longish side!)  This is the stage where I’m using lots and lots of pure determination and stubbornness.  Arassa is still fun to write, but it’s so tempting to put it aside and work on something new and different.  The Othermind isn’t helping, either, because lately I’ve been positively bombarded with images and ideas for the next book.  They sneak up on me, these ideas.  It’s a good sign that I’m reaching the end of Arassa, though.

This costumer’s blog is awesome (and cool).

She’s one of the people I want to grow up to be.  I’m so bloody envious of her hand-sewn eyelets on her new corset-in-the-making, that I am probably going to attempt some on my new corset.  And look!  I’ve got the boning for that corset!

It’s basically 5mm lengths of wooden sticks.  Technically, they’re used for basket-making, but if you want to make a really, really authentic corset…well, they didn’t have plastic boning in the 1700s, did they?

….because let’s face it.

Ducks are basically the coolest things on the planet.

So here’s my latest steampunk penguin – this one has faux articulated wings!

Besides YouTube, I spend too much time on eBay, because I can find pretty much anything I’m looking for, plus stumble across a few thing that no one should be looking for.  I remember once I found a glass bottle someone was selling that had a preserved mouse corpse in the bottom….

But anyway, I found this new-to-me eBay seller called The Velvet Collection, and I just had to share a few pictures of the corsets she’s selling.  They are too, too fab! 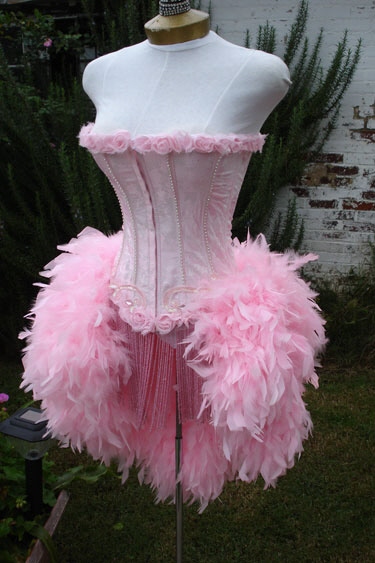 And this bottom one would be perfect for a steampunk something…