I Won a Mouse!

This one, the sweet little Chewbacca Mouse:

The artist is giving away one mouse every month from her blog; she chooses one person from among those who leave comments.  I had a sneaky plan: I wrote 32 poems about mice (most about HER mice) and submitted at least one every day.  Most were limericks,such as this one, about this mouse:

This is Terry, the mouse in a cat suit, and here’s his limerick:

But they all agree they’re amused.

When dressed as the cat,

He can be such a brat,

And the real feline is accused.

This is “Yorrick” the skeleton mouse: 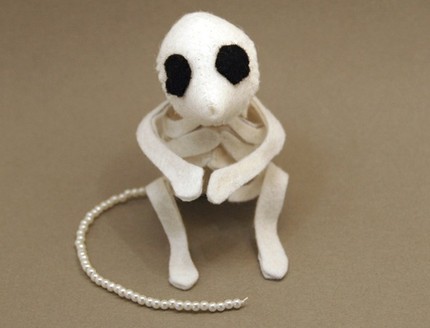 Said he, “Studies have shown:

A few were “re-written” versions of famous poems; here’s a re-written bit of Shakespeare:

To be a mouse, or not to be; that is the question;

Whether ’tis nobler by the scissors to suffer

The snips and stitches of courageous stuffing

And to be given arms by a surfeit of imagination.

And by opposing thumbs, grasp cheese.  To live, to sleep;

No more; and by a sleep to say we end

The stillness and the folds of unaltered felt

That wears not clothes; ’tis a consumation

Devoutly to be wished.

Once upon a midnight dreary, while I web-surfed, weak and weary,

Over many a quaint and curious internet and Etsy store –

While I nodded, nearly napping, suddenly there came a sight endearing,

As of some mice sweetly peering, peaking through my browser door.

“Tis mice dressed in clothes!” I exclaimed, “Peering from this Etsy store:

“Only mice, and nothing more!”

The artist said that more she “sees your name” the better; what she didn’t say is that the winner is chosen by some sort of random generator. It’s good I didn’t know, or I might not have put the effort into all those poems!  But for this month, after she randomly chose her winner, she had this to say:

Once again the monthly giveaway was a huge success! Thank you to everyone the commented for your chance to win! This month I have decided to award TWO prizes.

And the winner is…
D.Suplicki

The second prize goes to someone who has entertained me with her daily comments in the form of poetry. Purely for the effort I am giving Alisa a mouse with up to $40 as well.
Yay for The House of Mouse!  (And if you’re really desperate to read more of my 32 limericks and poems, visit here, and look for me among the comments!

Now first of all, this is hilarious:

I work in the building right next to where this shocking “protest” was happening, and I can vouch that there was only at most six people there during the busiest moment.  The previous day, they’d gotten a  few more to join in, but not more than twenty.

People kept saying though, (in as many words) that: “On the day Glenn Beck comes to town, THAT’S  when all our fellow protesters will come out.  There will be hundreds of us, and we will force our will upon the rest of you, because we will be the majority!  We will stop the hate!  We’ll overwhelm all the rest of you idiots who might like to hear what Beck has to say!”

Uh huh.  Is that what happened?  First of all, the tickets to the event sold out in the first two hours after they went on sale.  So that, right there, is 500 Glenn Beck supporters who weren’t able to counter-protest.  Then there’s all the people like me, who would have liked to get tickets, but were too slow to do so – but also aren’t the sort to stand about with signs.  And then there’s the ones who support Beck and do like holding signs:

In case you can’t read the signs, all you have to do is count the American flags and the yellow flags going past.  The yellow ones are the “Don’t Tread on Me” flags, and they belong to quite a number of Beck supporters.  Interesting point of fact: KING 5 news got their coverage right; they correctly reported that Beck supporters and protesters are mingled together BOTH sides of the street.  Almost everyone else (including the local paper) have it wrong.  You see, in most protest situations, the pro side stands on one side of the street, and the anti side on the other.  That did not happen here.  The side of the street being referred to as the “pro-Beck side” is across the street from the theater – and it’s true that side was almost all Beck supporters.  But I guess the newspaper didn’t bother to read the signs on the theater side of the street, the supposedly “anti-Beck side”.   That side is the one shown in the video above, and as you can clearly see, it’s more pro-Beck than not.  I drove down both sides of the street personally (very slowly), and counted.  The Beck supporters outnumbered the anti-Beck protesters by quite a margin, regardless of what you may hear elsewhere.  And did you hear what happened earlier in Seattle?  Seven thousand people bought tickets to listen to Beck at prices ranging as high as $500 each.  While there were all of thirty anti-Beck protesters outside!   Moments like this help restore my faith in Americans.

My pastor was  the childhood friend of Glenn Beck, and he was involved with the event itself.  He told me today that they raised $10,000 dollars as a fundraiser for our historic theater, and that Glenn Beck is matching that amount from his own pocket.  That is beyond cool, people, $20,000 for the Lincoln!

And perhaps even more cool (on a more personal level), is that Glenn Beck stopped by our local ice cream parlor before the event and his credit card was declined.  The credit people could not believe anyone would spent $500 for ice cream.  So Beck drove to an ATM, withdrew  the $500 and came back to make his purchase.  During the event, he told everyone in the theater that if they took their ticket to the ice cream parlor after the show, they would have free ice cream waiting for them!

Seriously, though, whatever you THINK you know about Glenn Beck, whatever pithy little sound-bites or scandals about boiled frogs (and it was a plastic frog, as Beck clearly stated on the show!) you’ve heard, you owe it to yourself to get a copy of Glenn Beck’s Common Sense.

This makes so very happy!!!!

Last post, I showed you pics of my art-in-progress, my little mostly finished free-sculpt of Captain Robert from Abney Park.

Today, I finished him:

Here he is and ain’t he cute?  I posted more pictures on my website.  And then, I emailed the real Captain Robert and gave him the link.  I thought he might get a kick out of seeing his mini-self, but I was surprised to get an email immediately back from him, saying it was ‘awesome’ and asking me if it would be okay if he re-posted the pictures.

So he blogged about it, sent it around in his email newsletter, and (I suspect from the HUGE amount of clicks sent my way from Facebook), posted it there as well.  He says it makes him “happier than he can say“.  Aw.  If I wasn’t already a huge fan, I would be now….

I’ve posted pictures of my finished dolls and/or sculpted figures here before, but it occurred to me that it would be fun to post a couple in progress.

This is my first lady pumpkinhead.  She requires only a bit of sanding, and then she’ll be ready to paint. 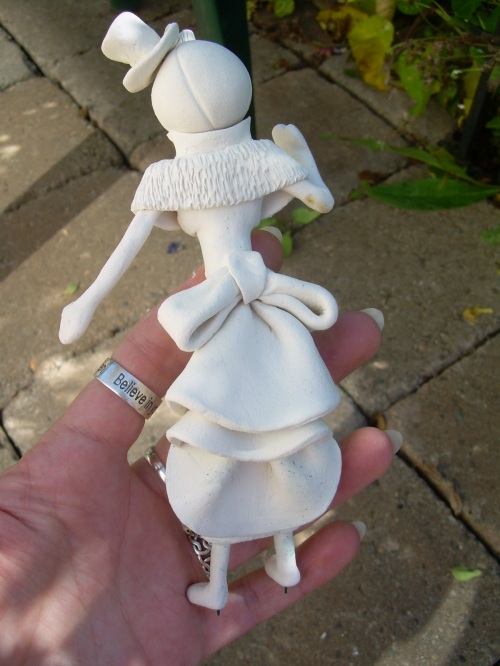 And here’s one still in the sculpting phase, although he’s getting close to being done.

Does he look familiar?  Check out this pic:

Yep.  I’m making my very own Capt’n Robert of Abney Park. (Making his microphone’s going to be the biggest challenge…)

Visit my doll-making site for more pictures and information:

Rarely have I been so completely riveted by a website as I was by this one.  Seriously, it was like a trip to a museum, and is perfect for anyone with the slightest bend toward natural history, goth, steampunk, or pirates. (Um yeah, am I the only one who hits all four of those….?)

Are you curious yet?

Where else can you find this?

It’s an absinthe labeled business card holder! So perfect for those of the Steampunk variety!  I want one!

That is a genuine mouse paw, preserved in a locket.  I’m fairly certain I don’t want one, but I find it…interesting.  And who knows?  Perhaps someday there will be a costume which requires a mouse foot.  I don’t put it beyond the realm of possibility, since only a few short years ago I was scouring the internet for a preserved chicken foot.  (For a “Jack Sparrow” costume, in case you wanted to know, and yes, this website does sell preserved chicken feet – where were they when I needed them?)

A skeleton marionette!  Now honestly, who doesn’t want one of these?  I could so take one of these to faire as an accessory to my pirate garb….

Other things I want are the scarab poison ring (actually been looking for one of these, so I’m definitely buying it), and assorted skull beads.  I’m always looking for skull beads for my pirate costuming, and these guys have awesome ones.  I also love some of the bone jewelry, the skull pill box, the glass vials, and the feathers.  There’s also an “eye” bracelet that would be so awesome with something… either pirate or steampunk….

Do you oil your war machines?

Or do you feed them?

Good question!  I really liked Scott Westerfield’s “Uglies” series, so I expect to like this as well.  (And the video’s great!)