Guinea Pigs Loose in the Garden?

There are people who claim that guinea pigs can’t be kept outside. That is absolutely incorrect. As long as they are acclimated to the environment, and have a dry, protected hutch, they will thrive. They are regularly kept outside in England. My pigs are loving their outdoor life…especially now, as they are officially useful, working homestead pigs!

The worst problem in my garden (and it is a really, really severe problem!) is bindweed. This stuff is incredibly evil, and it will not die. None of the methods I normally use for unwanted weeds works at all on bindweed. The only thing that works is pinching every last bit of new growth off at the ground the moment it appears. But my garden is way too big and full of far too many plants for that to be possible.

In a few sections where I was trying to grown annual vegetables, I’m giving up and switching over to an above-ground-and-piggie system. Because the ONE THING bindweed has going for it is that it is edible for animals. My rabbits, ducks, goose, turkeys, and chickens will all eat it – although the chickens really aren’t fans, so they eat very little. My rabbits, on the other hand, LOVE it. But I can’t let the rabbits into the annual vegetable garden because they also LOVE all the other veggies. And rabbits jump. They will happily jump up into the above ground planters I’ve switched over to and eat the veggies.

So no rabbits for bindweed control. I could pull it by hand, since it won’t become a threat to the veggies until it has grown knee high. But why do that, when you can work with an animal?

Enter the piggies. Guinea pigs don’t jump, and love to scurry around planters and eat bindweed. 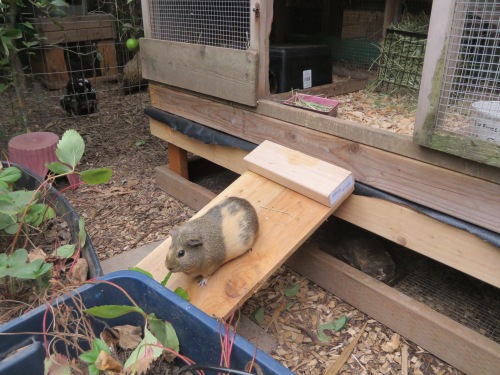 Their new garden patrol is fenced off and safe, and they go in and out of their hutch at will…including putting themselves to bed well before dark. They only thing I have to do is shut and lock their door. So far, it’s working perfectly. If it continues to work, I will have to consider getting a second group of piggies to work the front veggie garden!

(And if you’re wondering why the strawberry plants look so terrible, it’s because I transplanted them in the middle of summer, and they are objecting. They are already growing fresh new leaves, though, so they will be gorgeous in Spring.)

I love giving the animals I love a natural life, filled with the things they enjoy!

In other news, the turkeys grew up to five weeks old, and were mostly independent. One of their two bantam chickens moms decided she had taught them everything necessary, and went off to live with the other chickens in the main chicken coop. The other mom was sticking with it…sorta. She still slept with them, but didn’t really spend any time with them during the day. So I decided it was time. 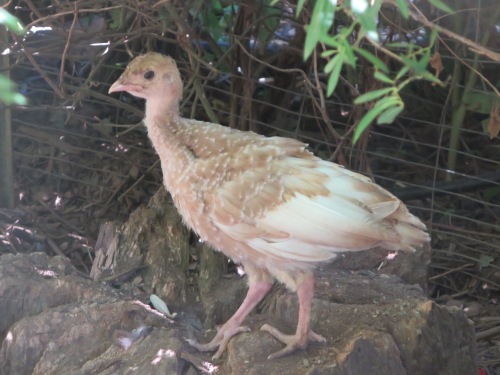 Within 15 minutes of posting them on my local facebook poultry group, I was fielding questions from four interested people. And then about 5 minutes after that, one guy took them all. He has a little farm, and although he’s been raising a few modern breed turkeys for thanksgiving each year, he is now getting interesting in becoming more sustainable, and wants these guys to be his new breeding flock of heritage Red Bourbon turkeys! So brought all five to work with me at the library, and he picked them via our curbside pickup. I have the best boss, honestly. When I texted her the night before to warn her I was bringing my turkeys in with me, she just said she couldn’t wait to see them.

Next year, if these bantams volunteer again, I might see what other interesting eggs I might get them to hatch. My mom suggested peacocks! Hmmm…..

I thought the turkeys would be the last babies on the farm this year, but it turns out my Muscovy hens had other plans. I don’t remember if I blogged about it, but my drake had a thing happen to him very early this year. He had a prolapsed penis, which resulted in him losing his penis. This isn’t a problem for a male duck, as the only thing he uses his penis for is fertilizing the females…he can still go happily through the motions of mating (and does all the time!) but he can’t actually fertilize those eggs. Or so I thought.

About three months after the…hem…incident happened, one of my females, Tabitha, went broody. I let her sit on the (I thought) infertile eggs while I decided whether I was going to get some eggs for her from somewhere else. I ended up checking the eggs just to be sure…and wow. There were babies developing inside! After checking with someone who checked with her vet, it turned out ducks can hold sperm inside them for up to three months. Okay, I thought…they just barely made the deadline!

And then, something went wrong late in the game, and the eggs didn’t hatch.

So that was it. No ducklings on the farm this year….or so I thought.

About a month ago, my second hen, Tilda, went broody. This was a good FIVE months after the…hem…incident happened. No way this girl’s been holding sperm this long. It’s scientifically impossible…isn’t it?

I let her sit, while I considered my options, and finally decided I’d just take the eggs away because it’s getting late in the season, and I really prefer having babies earlier. But just to be 100% safe…I checked the eggs.

And…there are babies inside! What. In. The. World. How is this happening? I’m thrilled to have a miracle drake who can apparently father children without a penis, because I really wanted to have a sustainable little trio of muscovies, and I love Tiberius and don’t want to replace him with another drake.

But really….what is going on here? 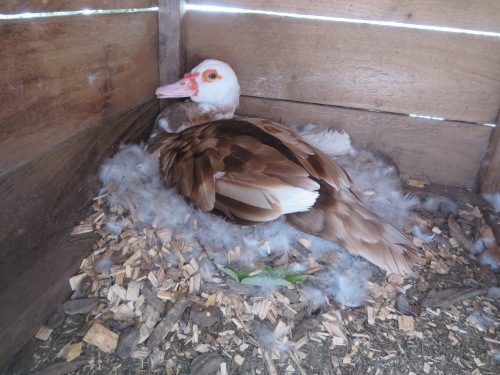 And then, after Tilda went broody, Tabitha also decided to go for a second attempt at being a mother.

Tilda has somewhere around ten eggs underneath her, and Tabitha has four. Tabitha’s eggs are also developing. Tilda’s eggs are due to hatch sometime next week? Maybe? I didn’t mark down the exact date, because I was so sure they weren’t fertile. Tabitha is due maybe a week after that. I’m pretty excited, guys.

In the garden, the grapes have wrapped themselves decoratively under the eaves of the chicken coop.

The bees are buzzing around their favorite flowers, which are leeks. I don’t grow leeks for the leeks, ya’ll. I grow them strictly for the bees!

And the artichoke is getting closer to flowering as well. This is also for the bees. And for the drama! If you’ve never seen an artichoke flower, you’re missing out. 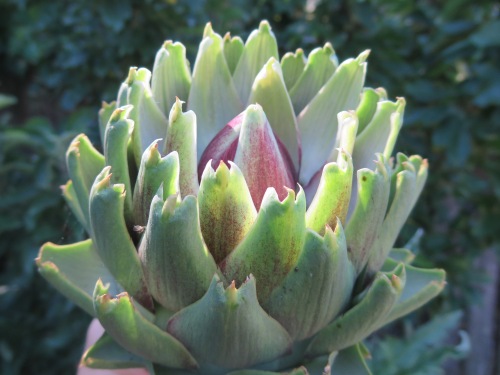 But the real star is Goosie. She is turning out to be the most perfect addition. She’s extremely chatty, but she only gives the loud and obnoxious alarm call when she really feels there’s a problem…like when she first saw the guinea pigs roaming around! Those piggies are clearly chicken-eating monsters. But after giving the alarm, she settles right down. And she’s so sweet and affectionate.

I’m loving having a goose in the flock.