Our Thanksgiving Turkey is a Fish

Since we don’t do Thanksgiving with the extended family anymore, I take the opportunity to make the day a fun cooking/baking experiment. This year, I REALLY broke from tradition.

He’s a rockfish, and I’ve never in my life bought a whole fish before, much less cooked one! But I’d been reading about salt crust baking, and really wanted to give it a try. The recipe said I wanted the head and tail and scales left on, but to ask the butcher to removed the fins and gills. I don’t know if I got a new guy, or what, but despite the sign next to the whole fish stating they would prepare the fish however I wanted, he didn’t seem to have a clue how to remove the fins, or even what ‘gills’ were. I had to discuss the fin situation with him, and he while he was trimming them off, he discovered the fish hadn’t even been gutted yet. So he did that. And then, when I got home, I discovered the fish still had its gills…I guess my impression was right…he hadn’t even known what those were! I ended up being kind of glad he hadn’t removed them though, because fish gills are pretty weird and interesting, and I was fascinated by the chance to see them up close and personal.

But to salt crust bake a fish, first you prepare about 3 pounds of coarse kosher salt by mixing it with egg whites and water to the consistency of wet sand. This was fun, btw. 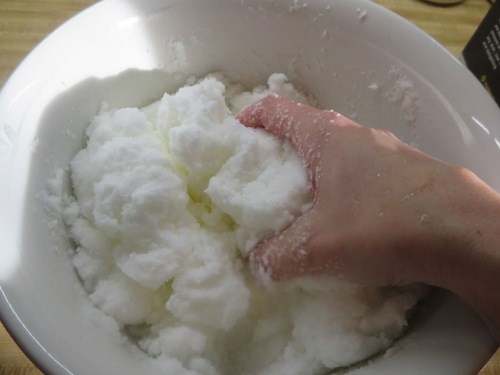 Then you put a layer on the bottom of the pan, and place the fish on top, with its belly stuffed with sliced lemon and herbs. 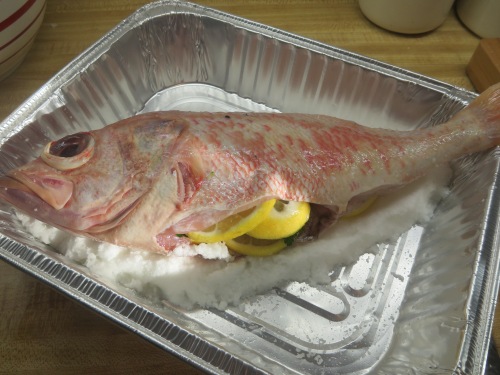 Then you cover over the rest of the fish with salt, packing it down tightly, but leaving the head and tail exposed.

The reason you leave the head exposed, is because you can tell when it’s done by looking at the eye. See how clear and translucent it is? When the fish is cooked, the eye will be cloudy and white. See below. (To double check, you can insert a meat thermometer, and check for a temperature of 140 degrees.)

The salt becomes VERY hard, and you have to break it open with some fairly serious blunt force.  And the meat inside is…wonderful. Flaky and super moist, and flavored with lemon and herbs. So good! And easy to de-bone, because after you slide the top layer off the bones, you just grab the tail and lift…and voila! the skeleton comes out in one piece! I’m definitely doing this method of cooking a fish again. So easy, and it was so luscious!

I also tried a new cake recipe, and it turned out to be the best cake I’ve ever eaten. First, because I like making pretty cakes, I decorated it for the holidays:

And inside….a cranberry cake! Now I normally am not that into cake, because cake is too often light and fluffy. Light and fluffy = bland and boring, in my book. When I like cake, I like a cake that’s dense and moist and punched with flavor. And this was that cake. 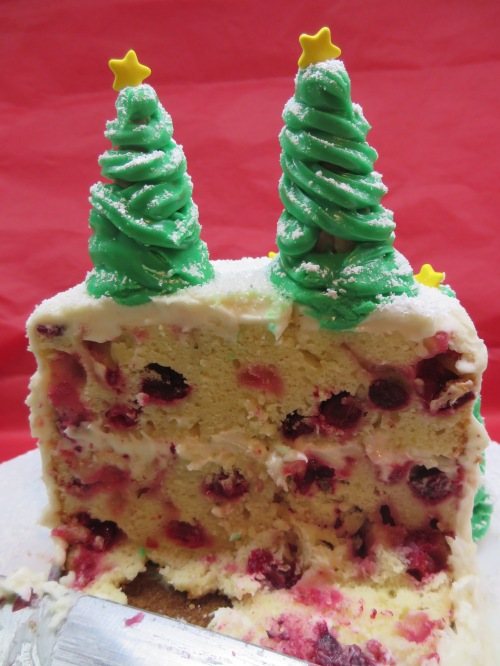 My mother also thought it was her favorite cake. And she didn’t want me to make this one, because she didn’t think cranberries in a cake sounded good. Also, because I’m not a fan of icing (I generally scrape icing off cake before I eat it) I googled “icing for people who hate icing” and came up with a suggestion for cream cheese icing.

And it was lick-the-spoon wonderful!