We all of us have monsters inside our heads: the folklore of that inward country, the things that frighten us when we are alone in the darkness. People not just of England, but across the world, find themselves haunted by thoughts of the same unearthly beings: vampires, ghosts, fairies, and gods. And if enough people have thoughts of the same monster, the magic will be given power to manifest itself in the image of what is feared. And thus the monster will be given teeth to bite, and will ravage across the land until it is destroyed.

When the newly-crowned Queen Victoria announces an expedition to India, Miss Winnifred Sebastian-Veals volunteers by joining an elite all-female group: The Society of Queen’s Own Monster Hunters. To her dismay, the other members are rather middle-aged, and more interested in knitting needles than sorcerous spells, vile manuscripts, and iron-bound doorways to hell. But after the Queen’s airship is attacked by an evil djinn, she discovers there is more to the ladies–and herself–than she ever imagined.

The Queen’s door was thrown open, smashed from its gilded frame, and inside everything was mangled and broken. A window was shattered, and a swirling torrent of black wind blew through the shards of glass. Her terrified maid was on her knees, clinging to the leg of the Queen’s bed, but the Queen herself was on her feet.

“I am the Rightful Queen of England, and of the territories of the Empire,” Queen Victoria said, standing in her nightdress, with her cloth cap all askew and her hair sticking out. She faced the broken window as though standing against an invading force. “You have no claim to assault my Reign.”

From the darkness beyond the crack, someone–something–laughed, and the gaslights shattered in explosion of fire and glass.

“The reign of a mortal is the dominion of a butterfly,” answered a deep and fearsome voice. A heavy, smoky smudge of wind bled in through the window, creeping along the floor like the tendrils of some living creature. “In a thousand years, every mark of your flesh will be forgotten from the earth.”

Beside me, Lady Belphoebe gasped. “Heaven save us, it is a Djinn.”

“It cannot be,” Lady Pennington said, “there are no Djinn in India!”

“There is one now,” Lady Belphoebe said. “Quick–can either of you remember how to combat such a powerful creature?”

I could barely remember what a Djinn was; we have none of them in England, either, and generally, unless they were planning to go abroad, English people did not study the monstrous manifestations of foreign countries as they felt they had quite enough monsters of their own to be going on about. Or at least used to, before magic was brought under control by Parliament. But regarding Djinn, the only thing I seemed to recall was that they lived in bottles or lamps. This was of little use, since this Djinn was most decidedly Not At Home.

The smoky tendrils reached further into the Queen’s rooms, turning the tiles black and burnt underneath them, stretching almost to the Queen’s little Indian slippers. She flinched, but held her ground.

“Who sent you?” she demanded, “What is the name of your master?”

The airship shook with the Djinn’s cruel laughter, and I felt how precarious our situation. If the outside and inner mechanical workings of the vessel were as broken as the insides, it was beyond the capability of flight. The capricious grasp of this terrible creature was the only thing remaining between us and a plummeting death. If we killed it, would we not also perish? It seemed to me there was one thing we particularly needed to know.

I took a deep breath and held it a moment, then released it, slowly, as I did before practice bouts of archery, and calming myself in the process. When I was nearly certain my breath would not shake, I faced the window as did the Queen, and loudly said,
“What are your intentions, oh Great and Mighty Djinn?” Beside the place of the creature’s home abode, I seemed to have a vague thought of a story in which the Djinn was addressed so. (And besides, it appeared to be of the male persuasion, and as Aunt tells me often enough, it never hurts to appeal to a man’s vanity when there is a thing desired.)

“My intentions?” the voice repeated, and a shiver went up my spine to hear it responding so directly to me. “My intentions are to kill my master in the most terrible and cruel way I can devise to do. I will pour boiling oil across my master’s flesh, and burning lead into my master’s mouth. I will rend each bone of my master’s bones separate from all the others, and pulverize them to powder. There will be nothing left of my master’s flesh once I am finished, not one speck of dust lying next to another.”

Volume 2: An Unwinding of Mummies is also available 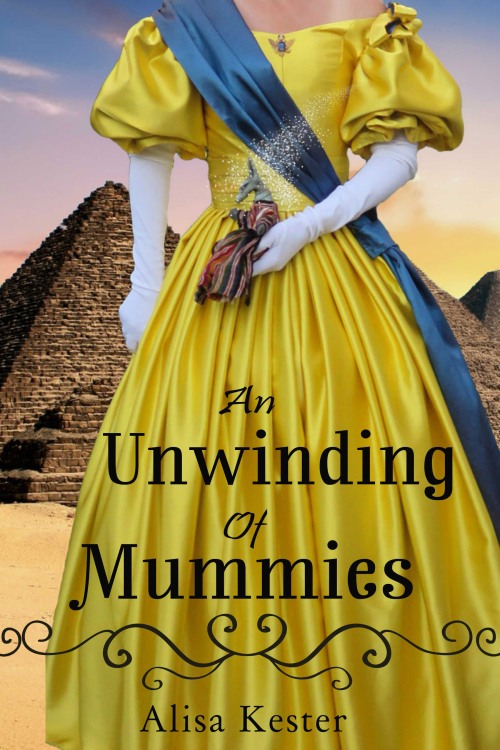 And coming soon, volume 3: An Agreement of Fairies