The garden has been producing green beans like crazy. I’ve canned four batches already, and I’ll be doing another tonight.  Maybe this year will be the year I don’t run out of canned beans before fresh beans are in season.

My frizzle cochin Ophelia (who already raised one batch of babies this year) went broody again, so I gave her some Silver Fresian Seagull eggs. I don’t know a lot about this breed of chicken because they are super rare, but I was won over by the description of the adults having the profile of actual seagulls, and the chicks being the cutest babies ever. I don’t know about the adult profile, but the chicks are truly adorable. 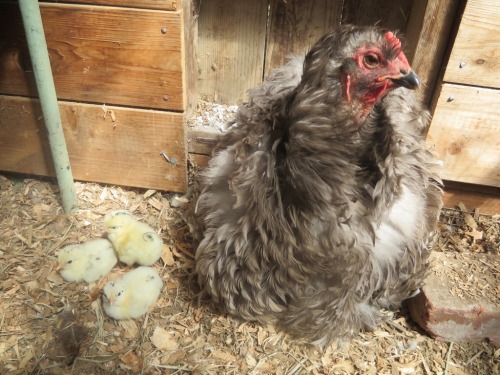 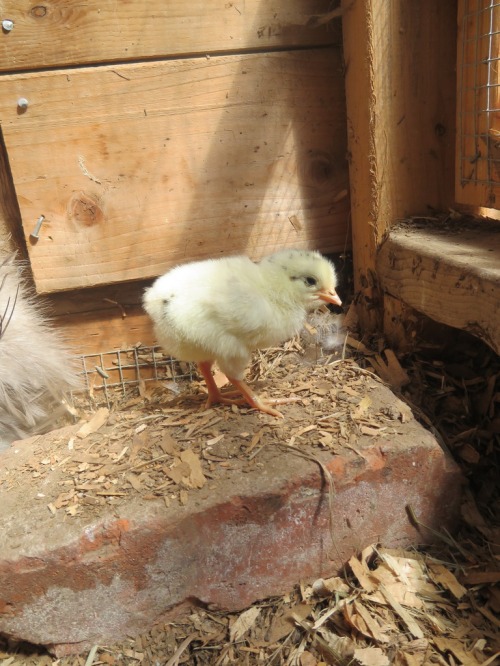 I gave her a dozen eggs, and it looked like six would hatch. But three of them died as just-born chicks. I’m not sure what happened with two of them, but the third was clearly squashed as it was busy trying to hatch. Ophelia is a big, heavy girl. I’m thinking I’ll keep her for fostering the meat chicks in the future, and leave the more delicate egg hatching business to one of my lighter girls.

They are a lot more grownup now. They have properly feathered wings and tails now. I need to have a photoshoot with them. They were not in the mood when I tried the other day…and Ophelia was being difficult too. She really doesn’t approve of her children’s pictures being plastered across the internet for everyone to see.  Do they look like seagulls yet? 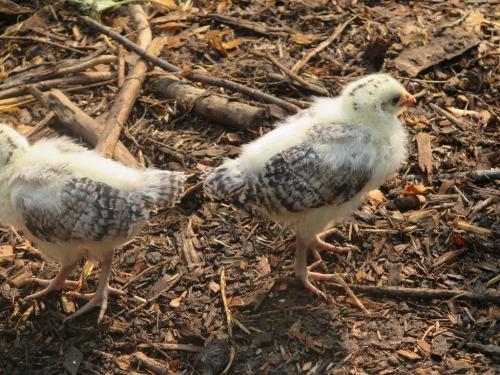 Charlotte also hatched eggs this summer, and hers are growing beautifully. They are Cream Legbars, which I wanted particularly for their blue eggs. I got one in the standard color: 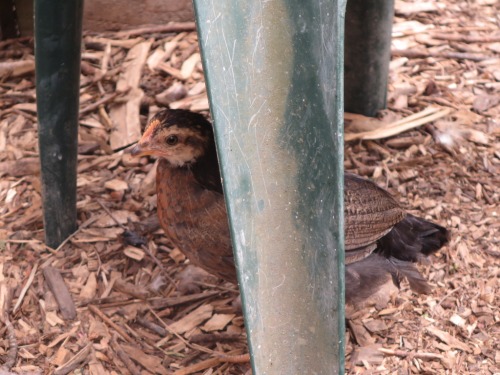 And two surprises – a couple of rare white sports! One is a girl, and the other a future rooster. 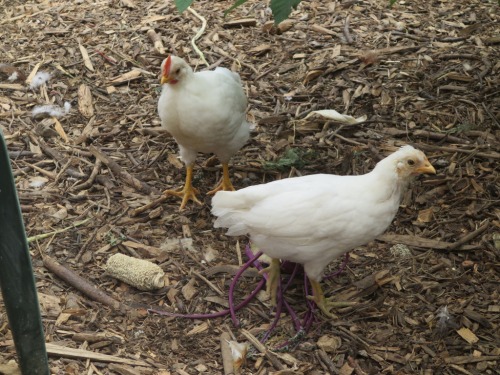 The one in front is, of course, the girl. The other is the cutest little roo I have ever seen. I’m in love with him, folks. If he plays his cards right, I might just attempt to keep him in the flock. I’ve already named him Bertie Wooster, which just suits his personality and makes me laugh every time I say it. The white girl is probably going to be Minerva (Minnie for short), and the brown girl still hasn’t told me what her name should be.

The Naked Neck meat chickens are still around, because apparently they have the whole thing figured out, and are refusing to eat enough to get fat. Skinny little birds, these guys. I think I’m going to have to look into other options for next year.

They are still funny.

I might still get a few next year, just for the humor and joy they add to the farm.

A few nights ago, I went to lock them up in their coop. I counted them and counted them, and came up one short. Mom and I looked EVERYWHERE. In the neighbor’s yard, in case it flew over the fence. Under the bushes and up in the trees. I kept expecting to find a sad little scattering of feathers, because I thought something had surely gotten it. But I didn’t even find feathers. Finally, I gave up.

In the morning, it was back in the yard, wandering around like nothing had happened. The next night, it was the same story. One was missing, and couldn’t be found. Finally, though, as I was passing under the grape trellis, I happened to look up.

There it was, looking down at me. I don’t know how many times I walked underneath this trellis while I was searching. And the whole time…staring down at me….

These guys. They are so silly.

I’ve been giving lots of garden tours, so many that I decided I needed to start charging. 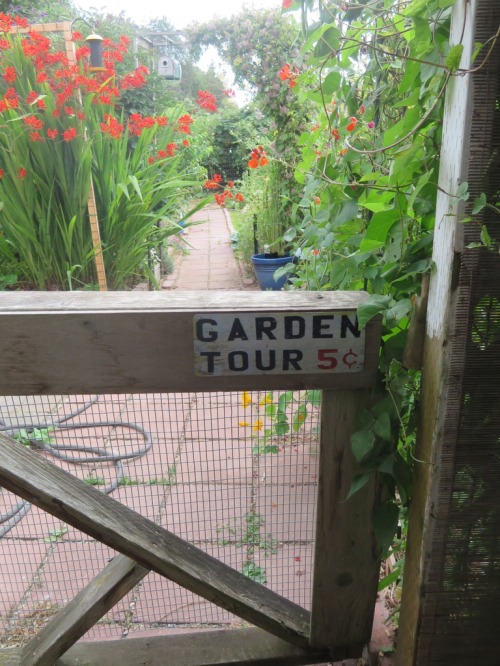 And I’ve been working hard on the summer kitchen! The inside is still quite a ways from being finished, but the outside is looking very pretty…. 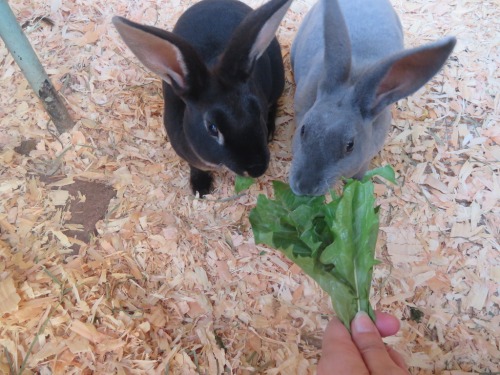 Last Sunday, Mom and I drove up by Hamilton to pick up two little 9 week old Rex does. These will be the mothers of my meat rabbits. I chose the Rex as my choice rather than going with New Zealand Whites because as a two-person family, we really don’t need a super high production animal, and with the Rex breed, I can learn to tan hides as well, and have some really lovely furs. This is good, because I believe it’s important to waste as little as possible when a death is involved.

Blackberry is a “black otter”, a color I didn’t know ever existed until I started looking at Rexes. I’m really pleased to have found her, because I fell completely in love with the color.

Thistle is a blue, and is so lovely and plush! Unless you’ve petted a Rex, you have no idea of how incredible this fur feels. It’s completely unlike regular rabbit fur. 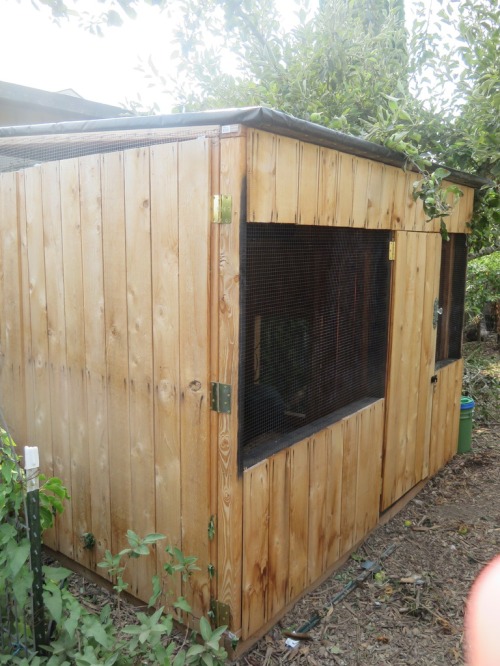 They are living together as a colony in the Bunny Barn I built them. It has a thick layer of pea gravel, followed by hardware cloth to keep them digging out (and other critters digging in).

The inside is spacious, enough room for a hay loft. The roof is a framework of wood, covered in more hardware cloth, with a used billboard tarp to make it waterproof. These tarps are pretty cool, being tremendously cheap as well are being fairly indestructible. You can’t choose what design is printed on it…mine is an advert for an island golf resort!

They have a litter box (which they are already using) because I want to collect their manure for the garden, and a hayrack made from an old magazine rack.

There is a side door; it will lead eventually into the buck’s quarters. Only the foundation of this section is built so far. The chickens are enjoying peering in through this door to be scandalized by the new neighbors! 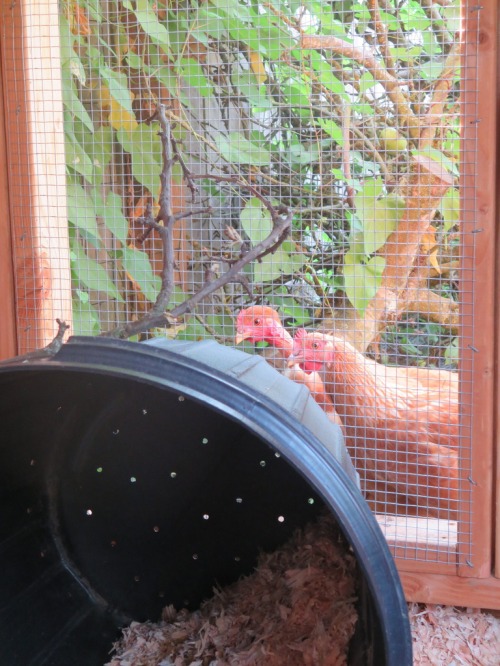 There are big windows in the front, both so I can walk by and see inside, and so the bunnies will be able to jump up on a window ledge and see out themselves.

They will have a great view of the chicken yard!

Then, yesterday, we met another breeder in Stanwood and picked up our buck. He’s a bit older, about 6 months, and is a real sweetie. 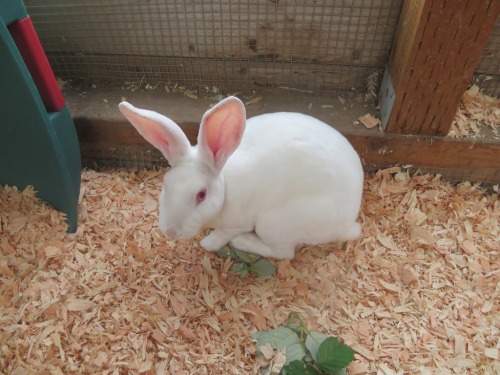 I think his name is going to be Sorrel (we name all our rabbits after garden plants.) Until his Bunny Barn wing is completed, he’s got a pretty fab apartment in the Roof Garden quail coop. I moved the white Bobwhite girls out to another coop, cleaned it out, and moved him in.

He loved it, from the moment I moved him in. Probably, he’d never been out of a wire cage before…and no matter how nice a breeder tries to make a cage, it’s no substitute for a pen with enough room to run and jump and play. I decided a long time ago that if I got meat rabbits, I wouldn’t keep them in wire cages, but in a manner that lets them express their ‘rabbit-ness’ (as Joel Salatin puts it.)

I put in a litter box for him, too. And if you’re wondering why their food is in/close to their litter box, it’s because rabbits like to poop and eat at the same time. His hay rack is made from the wire bottom of a hanging flower basket.

He likes his ‘nest box’.

And even though he has all this room, and doesn’t really know us yet, he still is friendly enough to come over and say hello.

It’ll be quite awhile before the does are ready to breed, but until then, I’m enjoying these little sweeties!