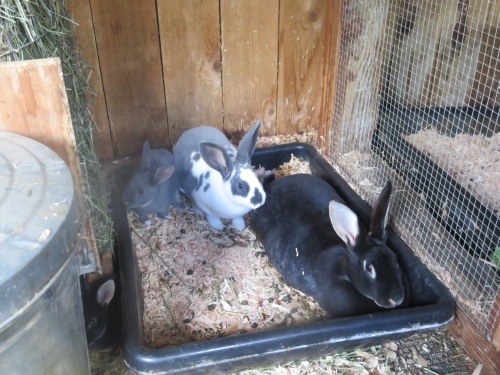 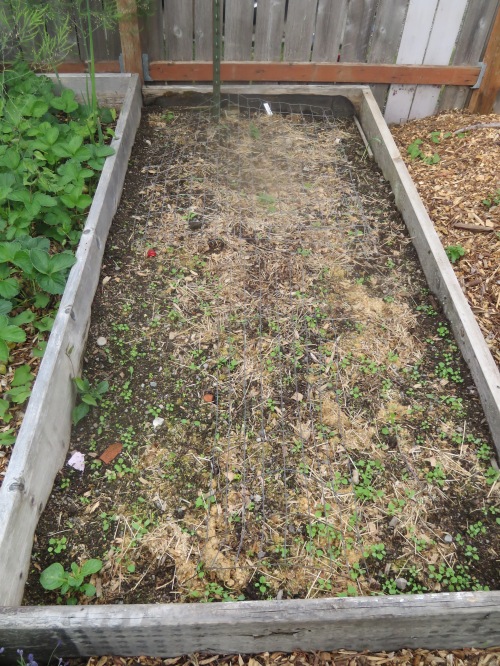 Today was a first for me – I processed a chicken.  I did everything myself: the kill, the plucking by hand, the gutting.  It was not one of my chickens.  My girls are my babies; I could never kill and eat them.  No, this was a young “accidental” rooster a friend of mine ended up with in her lot of supposed-to-be girl chicks.  Besides being a rooster she couldn’t keep because of legal restrictions, he also had a bum leg from an injury that he kept re-injuring.

So she was happy and relieved when I said I’d take him as my trial run into whether I’d have the heart and stomach to keep meat chickens as well as my beloved pampered hens.  She even bought me a kill cone.

If you don’t want to read about how it went, skip down to the first picture below  – that will be the beginning of the safe portion of this blog, the part about how my garden is doing.

I knew it would be easier to kill a bird (unlike my quail) that I didn’t “know”.  And it really was.  He was calm when she brought him, and he had no objections to me putting him upside down in the kill cone.  Once his head was through the bottom hole, I petting him a little on his face, and he just instantly relaxed, even closing his eyes.  It was just like he was going to sleep.  So then I just took off his head with a pair of hedge loppers.  It was hardly fun, but not nearly so emotionally difficult as holding the quail and letting thim go through their death convulsions in my hands.  Even though it’s just random muscle spasms, it’s not pleasant to feel.  I  greatly prefer the more hands-off of dispatching with a cone.

I heated water up to about 180 degrees, filled a bucket, and dunked the body a few times to loosen the feathers, then started plucking.  He was such a young bird, that it hardly seemed worth plucking all the wing feathers, so I just took the wings off at the shoulder instead.  Plucking wasn’t at all difficult.

Gutting was…interesting.  Quail are so much easier, because you just spit them open at the backbone and slide the guts out.  You have to reach inside the chicken which was…awkward, since I didn’t know what I was doing, really, and was afraid I’d burst something I shouldn’t and contaminate the meat.  I think I worried for nothing, though, because after I did some timid (and ineffectual) tugging, I finally just gave everything a firm pull, and it worked.  Nothing went wrong.  Here’s a tip: scrape the lungs out with a spoon.  They come right out, and it works for quail and chicken.

All together, from kill to final washing of the meat, it took just under an hour.  Not too bad, and I wasted a lot of time looking at gutting directions on my Kindle, and being a little squeamish.

I discovered that I could definitely be okay with meat chickens.  And my friend who gave me the rooster is also interested in keeping some, as is another friend of mine.  Neither of them is ready to do the killing themselves yet, but we’re talking about each raising a few meat birds next year, then getting together for the processing.  They are willing to pluck and gut, which are the two most time consuming things.  Me, I’d operate the kill cone.  It’s not the job I’d like, but I believe SO strongly both in eating meat, and in eating meat that has been raised in a healthy and humane manner.

So…we’ll see.  It’s a weird world.  If you’d told me even a couple of years ago that I would be writing today about how I butchered a chicken, I would never have believed it possible.  But I’m glad I’m here.  I’m glad I have the resolve to live up to what I believe, even when it’s a hard, unhappy thing.

And now you get some pretty pictures of my garden.  The front yard vegetables have grown by leaps and bounds since I posted that video tour three weeks ago.

The beans are as tall as me, and beginning to bloom.

The Runner beans in the back yard are also in bloom.  I love beans.  Usually I eat all the ones I produce right away, but this year I planted a ton.  I’m hoping to have enough to freeze some.

The experimental millet planting seems to be doing really well.  If I actually get millet sprays, I’ll plant a whole bed of this next year.  The quail would adore fresh millet!

I’m discovering that Oakleaf lettuce is real winner.  It’s so pretty, and tasty, too!

The tomatoes in the grow bags are getting close to ripening.  I think I’ll have my first red currant tomato ripe next week, and these Japanese Trifelo tomatoes are getting huge.

The tomatoes in the straw bales are also doing better.  I was hoping that there would be enough in the breaking down of the straw itself to nourish them, but that appears not to be the case.  I gave them a boost of fertilizer, and they seem to be greening up and putting out healthy new leaves.  I don’t believe straw bales are going to be a method I’ll use in future.  The ones in the grow bags are doing SO much better that it isn’t worth the expense of buying bales when I’ll just have to fertilize them anyway.

Speaking of grow bags, the very cheap seed potatoes I bought from Walmart seem to have been infected with some virus.  They suddenly developed black spots on their leaves, then turned yellow and died.  The other potatoes in the garden are lush and fantastic and beginning to flower, so I can only think it must be a virus affecting these.  So I just pulled them out and tossed them

But to my surprise, they’d already managed to set a nice small crop of new potatoes!

Yay!  I can’t wait to taste these.  I’ve never actually grown my own potatoes before.  Now I’m really hoping for great things from the other two varieties.

The chickens, quail, rabbits, and of course we humans are really enjoying the salads we’ve been getting from the garden.  All the different varieties of lettuce really made for a pretty salad!

Tonight for dinner, I think I’m going to steam a pot of baby beets and beet greens, along with some of those new potatoes.  Yum.

One real success I’m having is the squash plants I put in the cold frames.

These plants are easily four times as large as the ones I put straight into the ground.  When the nights were still a bit cold, I closed the tops, and that kept them nice and cozy.  Next year, I think I’ll put melons in the cold frames.  This just might be the perfect method for melons in my Pacific Northwest climate.

Last post, I told you about how I built a new raised bed around the Honeyberry bush, and planted strawberry seedlings in it.  The other day, I looked at it from a little distance, and saw that weeds had planted themselves in it as well.  But when I went over to pull them out, I realized something interesting:  almost all the “weeds” were actually vegetables!

I had kale and lettuce:

And even two squash plants!

How funny is that?  I left most of them there.  I wish all my weeds would actually be vegetable volunteers!