Every time I think I’ve built the last animal-related housing project, I discover there’s another thing I need to make. This year I’ve built a duck coop, an angora rabbit pen, a meat rabbit grow-out pen, and a nest box for the pigeons. Is that it? I feel like I’m forgetting something! Anyway, let me show you some pictures of the latest things.

The meat rabbit grow-out pen. I was using the second chicken coop for this, but now that I’m raising meat birds, this coop isn’t available for rabbits anymore. In the front yard veggie garden, there’s this one awkward corner. It’s awkward because it’s always overgrown with bindweed. Rabbits love to eat bindweed! So I built this.

It’s about 6X2 foot, and I need to roof it, but roofing it isn’t a huge priority, since it will only be in use during the summer months, when I’m breeding rabbits.

As the bindweed attempts to grow up through it, the rabbits will eat it. Mwahahaha! I love it when I can solve two problems with one building project!

Also, the rabbits will be conveniently to hand, when I’m weeding in the veggie garden. They seem to like it. 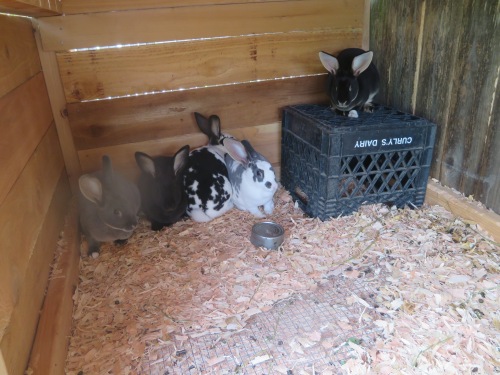 Next problem was the pigeons. Whenever you get a new animal, there is always a learning curve, while you figure out what they really like/don’t like. My plan was to have them all nest in the attached building. Problem is, my first male on the scene, Emerson, decided that ALL the building belonged to him and his mate. He would not allow any other pigeons to nest in it. My second male, Mordecai (Emerson’s son), was growing increasingly desperate to find a nesting area. There was constant tussling in the coop, and no one was happy. So I built an attached one-pair nesting box on the opposite side of the coop. (It still needs a roof.)

Mordecai was SO HAPPY. He immediately went inside and started calling Esther to come and see.

It’s nice because I can open the back from the outside of the coop in order to clean, or check on things. They immediately built a nest, and peace was restored. (You can see the original pair, Emerson and Peabody, canoodling at the entrance to their nesting area.)

This nest box is working out so well that I think I’m going to build several more on the back side of the coop, then close off the attached mini-shed and have it be for hay/food storage. It’s more difficult to clean, and it would be so much more convenient to have all the pigeons nesting in single-pair boxes like this.

And now for the cool story of the month. My mother and I belong to a neighborhood social media group called ‘Nextdoor’. People in your city can post warnings, requests for advice/recommendations, etc. About a week ago, my mom commented that someone had found a mysterious ‘strange bird’. This woman was sure it wasn’t a chicken, but otherwise had no clue. It had marched right up to her neighbor’s back door, and appeared to need help, but since she wasn’t sure if it was an escaped domestic bird, or a wild bird, or even if it was an adult or a baby, she wasn’t sure what to do. People were commenting thinking it was anything from a dove to a baby hawk! I went and looked at the pictures, then laughed at my mom. “That isn’t a strange bird! That’s a coturnix quail – we used to have those in the backyard!” I contacted the concerned lady, and she asked if I’d be willing take it, since I mentioned I was currently in the process of hatching more of these quail. I said sure, and that is how I ended up with Scruffles – who I renamed Amelia, after Amelia Earhart. It seemed appropriate, given how adventurous she was. She had obviously been through some hard times, she’s blind in one eye, and was missing a lot of feathers. 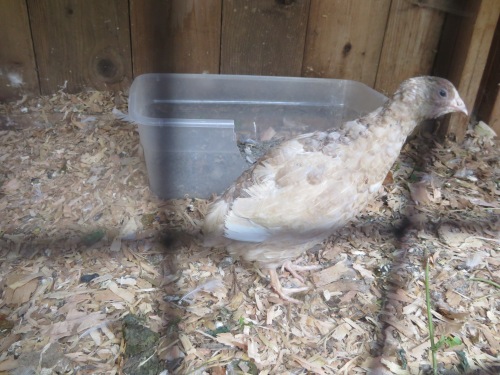 The feathers are mostly grown back now, and she’s laid about seven eggs for me.

What’s really weird, though, is that two days after she came to me, the lady who found her called back. Another quail had turned up at a neighbor’s yard. The cat had gotten this one, but they’d rescued it, and didn’t see any injuries. This one was a male, but unfortunately, it died the next day. They couldn’t find anyone in the area who had quail, or had ever heard of quail. I don’t know whether these two escaped, or whether their owner had gotten tired of keeping them, and had released them into the wild. Please don’t do this, people. Domestic animals cannot survive in the wild, and even though there are wild varieties of quail, coturnix are so thoroughly domesticated that they have no wild instincts at all. At least little Amelia/Scruffles found a safe home. She’s a bit lonely, but my quail eggs are due to hatch in about three days, so she’ll have friends soon.

And one last thing. I discovered this fantastic baking blog: https://www.womanscribbles.net/

I’ve tried three of her recipes so far, and they are extremely well-written and clear to follow. All three breads turned out perfectly – just like the pictures! – and were very tasty. One of them, Spanish Bread, is going to be a regular in my household.

Oh – and one more last thing! Remember the Freedom Ranger meat birds I was testing out this summer?

These guys were the perfect birds. They were completely docile and calm, quiet, and sweet-tempered…right up until a couple weeks before butchering. Then they suddenly turned into little peckers. Literally. We harvested them and they weighed out at about 3 1/2 to 4lbs each. Perfect. A couple of days ago, Mom roasted one of them, and we both agreed it was the best chicken we’d ever eaten! Tender, so full of flavor, and the skin was so crisp and wonderful. Freedom Rangers are it. Next year I’m getting a bunch more!