It’s the way of life on this earth. One creature dies, another is born…or hatched. I lost one of my sweet hens, Tilda, a couple of weeks ago. She was fine, and then she wasn’t. I don’t know what happened; she was always an extremely busy girl, always foraging and running about, and I noticed pretty quickly that she wasn’t feeling well because she slowed way, way down. I checked her over, but nothing appeared to be wrong. But there was something, because shortly afterward, she developed sour crop. Problems with the crop are often a sign there is something seriously wrong inside the hen’s body. Since this particular hen was a golden sexlink, a variety bred specifically to pump out a huge amount of eggs, I suspect it was something amiss in her egg laying apparatus. These hens aren’t meant to last much longer than two years, and that’s about how long she lived. This is why I really prefer heritage breeds.

I’ll miss her. She was one of the sweet girls, always jumping up on my lap for a snuggle. I made sure she had one last snuggle before she went.

But following close on the heels of this loss is new life. Just a few days afterward, the one solitary silkie egg in my incubator hatched. 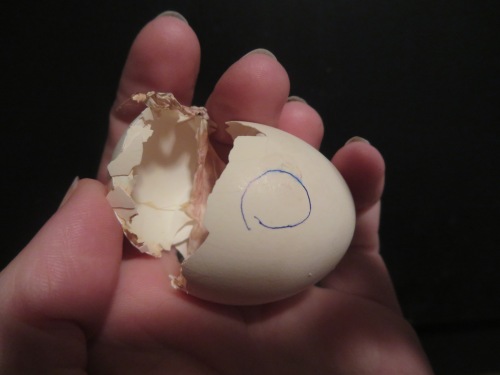 She is a miracle chick. In a previous post, I talked about how I got seven silkie eggs in the mail, and the box hadn’t been separated out of the normal non-fragile mail. My mail carrier told me she was very upset that she found the box tossed in the bottom of a mail bag, underneath all the other boxes. I wasn’t sure if anything could survive that! But candling the eggs, one of them was developing. I prayed for that egg. So many things can go wrong. Once, even, we lost power and had to put the silkie egg outside under a broody hen for a few hours.

Since she was the only silkie egg to hatch, I didn’t want to raise her alone, without a mother hen or siblings. I had Mottled Cochin Bantam eggs hatching the same day, underneath my smallest hen, Sansa. I checked on her, and she had two adorable little black and yellow chicks that had hatched so far, with more to come. That night, I put little Lucie out underneath her, praying she’d be ok.

In the morning, I went to check, and found the two hatched cochin chicks dead. Sansa had accidentally stepped on them. Even though she should have been small enough to mother them – I know people put bantam eggs under full-sized hens – she wasn’t gentle enough for such tiny babies. There were three other eggs with pips under her, and one other that had been stepped on while trying to hatch. It was still alive and peeping, but I couldn’t immediately tell if it was ok. There was no sign of Lucie.

I thought she was dead, and being a dark colored chick, was in a corner somewhere. Heartsick, I gathered up the hatching eggs and brought them inside to the incubator. The one that had been stepped on inside the shell needed help getting out the shell, but once out, it was perfectly fine! The rest weren’t ready to come out, so I left them and went to find out what happened to Lucie.

I lifted Sansa up to check underneath her better, and there was little Lucie, right between Sansa’s feet, alive, untouched, and looking up at me like “What?” 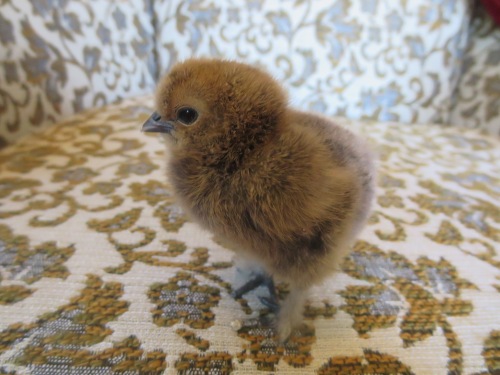 Isn’t she sweet? The breeder I bought the eggs from had a mix of all colors of silkies, so there was no way to know what color would hatch from my eggs: black, white, buff, partridge, or splash. I was particularly wanting a partridge. Guess what color Lucie is? Yep, she’s partridge!

I brought her in the house and put her in the incubator too, until I could get a brooder set up. Sansa, meanwhile, was freaking out. She knew she’d had babies, and she knew I’d stolen them. She was so upset, and of course it wasn’t her fault I couldn’t let her keep them. Mom called around to the local farm store, and they had some Red Ranger chicks left…and one solitary silkie. She bought two of the Red Rangers for Sansa, and the silkie to be Lucie’s friend.

Meet Lola. She is, I believe, a buff colored silkie.

From the Mottled Cochin eggs, I ended up with five chicks. 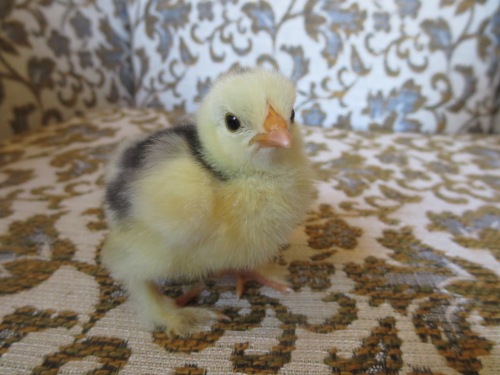 They are such tiny, perfect little creatures.

Sansa, meanwhile, went from being a calm friendly bird, to being a velociraptor. If I go anywhere near those two Red Ranger chicks of hers, if I reach for a nearby water bottle to refill it, she goes berserk. She has not forgotten or forgiven the fact that I stole her previous babies, and she will murder me if I try to take these two! Last year, she raised two chicks for me, and had no problem whatsoever with me holding her babies. This year, wow. I had to move her and the chicks into a different coop, and the only way I could was pick the babies up (one in each hand) and carry them, knowing she’d follow. She not only followed, she flew repeatedly at me, as high as my chest, screaming the curses of her people, and biting me. If she weren’t such a small hen, she’d be terrifying! I hope she settles down, once she realizes I’m not going to steal these chicks.

In addition to the chicks already mentioned, I also have four Freedom Rangers. I’ve heard really good things about these as meat birds. So far, I’m impressed. They are calm, contented birds, that are curious and very easy to keep.

They are obviously a very stocky build, with huge feet and legs, and are already much heavier than the two heritage meat breeds we tried in previous years.

The garden is doing well this year. The fruit trees are loaded with blossoms! Below is a little columnar apple I planted just last year!

This year I finally followed through and planted comfrey starts throughout my garden, and they are all doing great. 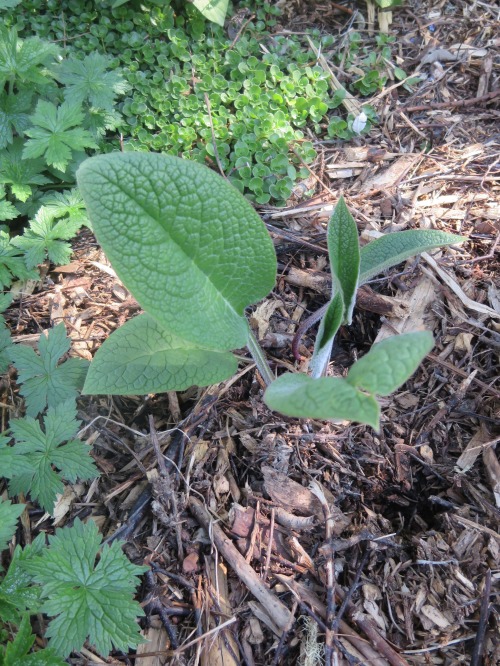 The dandelions are springing up everywhere, and I love them. I used to try to keep them contained, and grow lots of kale, cabbage, and other greens for the chickens. I’ve since wised up. Dandelions are much easier to grow, and MUCH healthier to eat. They are packed with nutrition! They are one of the best greens for humans as well. And the chickens, rabbits, and other critters love them. Plus, the flowers are gorgeous. Definitely as pretty as domesticated flowers. So I’m letting them go, wherever they want. And this year, I harvested about two cups of dandelion flower petals, and made Dandelion Honey. 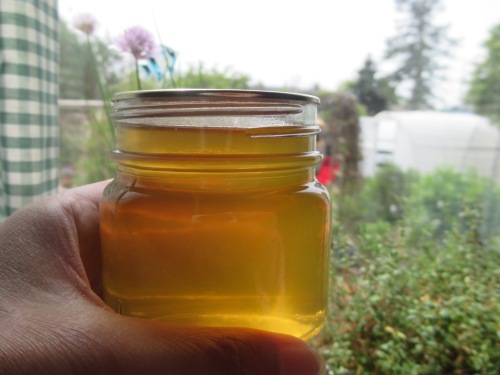 It’s supposed to taste exactly like bee honey. I don’t think it does, but it is very good. Sunshine in a jar!