Pigeons grow INSANELY fast. Remember how small they were at hatch?

Here they are, today. 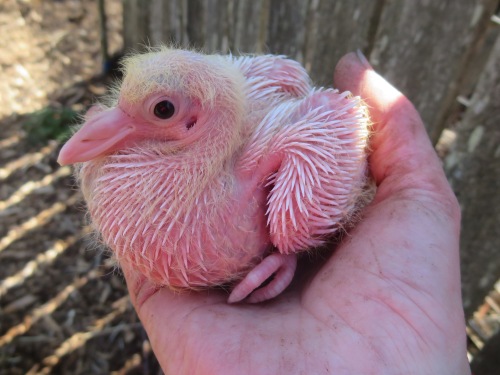 Such funny looking, prehistoric birds! And so calm. They don’t mind being taken out of the nest at all. The parents have differing opinions on that subject. The father, Emerson, would guard his chicks to the death when HE’S on the nest. He growls and pecks and slaps me with his wings. Peabody, the female, is pretty sure I intend no harm. She prefers I not touch, but if I do, she just gives me a precautionary wing-slap, then settles down and lets me pet her and the babies. Needless to say, I handle the chicks when she’s on guard duty…or when they’re both off the nest.

The first ten days of life, the parents feed the chicks with ‘milk’ produced in their crop. They are one of only three birds that do this, and it’s really cool. The crop actually changes to produce milk much the way human breasts do, then changes back after ten days. These babies are on solid food now. When I touch the thin skin of their chests, I can feel the crop’s contents and tell by the bulges that the parents are bringing them whole grains and peas to eat.

The mealworm farm is doing fantastic too. Most of the original worms are now either pupae or beetles. When the beetles first hatch, they are white, then slowly turn brown, then black.  Hopefully the beetles are laying eggs, and soon I’ll have a bumper crop of new worms – some to feed the critters, some to let grow into the next generation of beetles. They are kinda creepy, but definitely the easiest animals I’ve ever cared for. Put them in some wheat bran, add a few slices of raw potato, and let them do their thing.

The Spring here has been fantastic. About 60 degrees during the day and sunny, in the 40s at night. The garden is exploding with life.

I filmed a little video tour of my March garden. My camera shut off halfway through, so it’s in two parts.

5 responses to “End of March”