Last month I bred my two Rex does for the first time. About five days ago, one or both of them gave birth.

There are six of them, and I’m not entirely sure whether both does gave birth in the same nestbox (entirely possible in a colony situation like mine) or only one of the does was actually pregnant. Either way, all six kits are extremely fat and healthy, and squeak and try to suck on my fingers when I pick them up.

I’ll get good pictures once they are older – I’m trying not to bother them too much at this stage. One is solid grey. 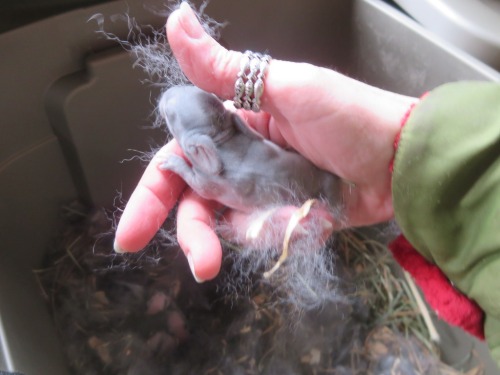 Two are black otters, and three more are white and black spotted.

The does, which got EXTREMELY hormonal and feisty during the pregnancy (both of them!) are now calming down. I can actually pet Blackberry again without risking losing a chunk of skin. (I have a nice healing mark on the back of my hand where she managed to nail me while I was trying to put food in her bowl.) I kept hearing from people who said you can’t breed rabbits in a colony situation because the does will kill each other’s kits – or fight each other. I confess I got a bit worried when they turned so crazy-mean to me, but other than a bit of chasing around at feeding time, they continued to enjoy each other’s company. I’d see them snuggling together and grooming each other.  I think it helps that they are sisters, and have never known life apart from each other. They also don’t seem to mind me handling the babies!

At the end of April, I’ll have new chickens in the family, too. Sansa, my Cream Legbar hatched last Spring, has gone broody for me.

I plan on giving her a couple of chicks from our local feed store. Probably a Speckled Sussex, and maybe a black sexlink.

And just last night, my proven broody mama, Ophelia, my frizzle cochin, decided she wants in on the action. As she never really cares about her children once they reach the age of self-sufficiency, I’m giving her the meat chicks this year. We’re trying three Dark Cornish as an experiment this year, and about 5-6 Freedom Rangers. She’s a big girl, so these larger clutches work out really well with her.

Spring is busting out all over here…for the first time, my young pear trees are covered in buds!