I have so much to write about the garden and the animals, and I’ll get caught up on that very soon – but first I just wanted to blog about a quick little trip I took to Los Angeles. I primarily wanted to visit the FIDM museum’s exhibit of Hollywood costumes (I’m completely obsessed with this one canary yellow dress from Crimson Peak) but since Universal just opened a Wizarding World in their Hollywood park, of course I had to visit! 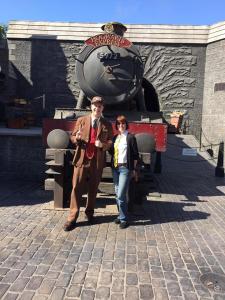 I was a little concerned that it would be too crazy busy since it just opened on April 7th, but since we bought our tickets in advance, we were given admittance to the park an hour before the general crowd was allowed in. This made for a lovely visit.

It was just my friend and I – and a small handful of others.

The amount of detail was astounding. And you really had to pay attention to see it all. For instance, the hog’s head in the Hog’s Head Tavern was animatronic, but only sporadically.

And this is the sort of thing I adore – there was fake owl poop underneath them on the floor!

Some of the shops lining the street were genuine, others just fronts, but all of them had fascinating displays.

This picture didn’t turn out well because of the reflection, but that’s a cat. Made out of a measuring tape!

The icicles were completely believable. Even though this was Southern CA.

Hogwarts Castle was fantastic, inside and out.

It was really too dark inside to take good pictures, but the detail and fantastic whimsy continued flawlessly.

And the rides were wonderful. The hippogriff roller coaster is worth riding, even though it’s pretty tame and clearly for the kids – you are taken past a recreation of Hagrid’s hut that isn’t to be missed. And the Journey to Hogwarts 3D ride is the best of it’s kind. So much fun!

While we were at the park, we also rode almost all the non-wizarding rides (the Transformers ride is particularly good) and took in the shows. I enjoyed seeing a trained chicken as part of the animal actors show.

We stayed at the Millennium Biltmore hotel for most of our stay in LA, and it was gorgeous.

And perhaps our favorite part of the entire trip, was seeing A Gentleman’s Guide to Love and Murder live on the stage.  I can’t even tell you how witty and fun this was – and it had the most brilliant staging I’ve ever seen.  If you get the chance to see it, absolutely do!

And if you have seen it, and wonder how the lead does all those amazing quick changes into different characters…watch this! Amazing costuming!