How do you relate to an omnipotent, omniscient, omnipresent God? How’d He create the world? Where’d He put it?  Where’s Heaven?  Where’s Hell?  How will He wipe away every tear?  How can He be everywhere?  How could time begin?  How’d He come to earth and stay in Heaven?  Why did Jesus pray if He’s God?  How’d He perform miracles?  Why is Jesus the only way?  And how can God be three, yet One?  Ever wish He’s reveal Himself like with the prophets, opening your eyes to another realm, showing you, through a vision, His invisible qualities and deepest mysteries?

The above was taken from a message my pastor (Bruce Wersen of HisPlace Church) recently shared.  He’d spent thirty years trying to come up with an analogy that would perfectly help us understand the unexplainable – those unseen things about God that mankind has struggled to wrap their minds around since time began.  And finally, just in time for Easter, everything that he had been researching and learning came together, and God revealed it to him…and it’s something that everyone on earth experiences every night!

I want to talk about my reactions and thoughts to Bruce’s message, but first, here are links to both a written transcript of that Easter message and to an audio recording.  Go and check it out before you read any further here, because from this point on, I’m going to assume you have, and many things I say next will make no sense if you haven’t.

Dreams.  I’ve been an intense dreamer my entire life.  I’ve dreamed in series, where it’s like I’m exploring a novel, and every night I’m in a different chapter, and the story keeps continuing.  Lucid dreams are a regular thing for me, both the fully lucid ones where I’m in complete control of what happens, and the semi-lucid variety where I know I’m dreaming but I can’t really summon up the will (or perhaps the belief) to change anything that happens.  As a result, perhaps, I continually read about dreams, seeking to discover what science knows about how they work, and why.  Science knows that we have to dream – or we die.  They’ve done experiments where they have woken a subject every time he began to dream, and it was only a short time before he started to break down physically and mentally.  Humans are born with a need to dream.  Why is that?

Humans are also born with a desire to create and/or explore ‘lesser realities’ even when they are awake.  Books, movies, games…they all involve a created, shared, lesser world, where each of us either joins that world through a POV (main character we identify with) or, as in the case of games, sometimes create an actual representation of ourselves (an avatar) to walk into the game and interact in its world.  This drive is so universal.  We begin doing it as children; we play by immersing ourselves in lesser realities we create.  And I would venture to say that even those of us who don’t continue to create these worlds from our imagination often wish they could. It’s pretty much a cliche that everyone has an idea for a book they’ll write…someday.  That instinct to create a world, that universal drive to inhabit a creation that never existed until we made it…where does that come from?

In one of the most powerful dreams I ever had, I was standing by myself in a high place.  I’m afraid of heights, and I was very afraid in this dream.  I was clutching the hand rail, palms sweating, wondering how I was going to get down from where I was, when I suddenly realized that I was dreaming.  Instantly, all fear lifted away.  I knew, absolutely and with no doubt, that whatever happened here, I could not experience lasting hurt.  I had never experienced a feeling like that before, and I had never truly realized how much fear is part of our daily life.  Fear of falling, fear of rejection, fear of dropping all the little things we’re holding close.   Big fears, small fears…bundled together, they make a mighty burden that you don’t even know you’re carrying, until suddenly, they are all gone.  I didn’t even do anything in the rest of that dream.  I just stood there, surrounded by a world that felt completely real: the sun was warm on my face, the handrail was still solid under my fingers, and yet, all because of a shift of perception, I was free. 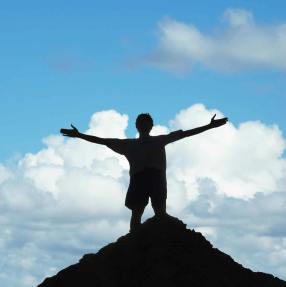 Come unto Me, all ye that labor and are heavy laden, and I will give you rest.  Matthew 11:28

Bruce’s message struck a particular chord with me because of that dream.  Ever since I’ve had it, I’ve thought: That is what our world is like, really.  It’s like a dream, where we’re afraid when we don’t have to be, because we think the world we’re in is so much more solid and lasting than it is.  If we only fully realized that we don’t have to be afraid,  how differently would we live?  I’ve felt it in dreams so often.  The more aware I am of my surroundings not being real, the better the dream seems.  Everything is brighter, more vivid.  It’s almost like I have more reality instead of less.  If I could only transfer that feeling of fearlessness and purpose to this lesser reality – to the one in which I’m supposedly “awake”.   We’re meant to feel something like that, I think, when we become Christians.  The Bible certainly tells us, over and over again to be not afraid.  We’re meant to understand that there is another, more solid, more “awake” world than ours.  And when we do, suddenly we’re just transients here – our real life awaits us.

The thing about lucid dreaming is that you really get to test the limits of the dreaming world.  I know for a fact that all five senses work perfectly well in a dream.  I’ve touched, seen, tasted, smelled, and heard as if I were awake.  I’ve felt pain, both emotional and physical.  Dreams genuinely hurt, but once we awake, the pain doesn’t last.  But oh – it can hurt while we’re in them.  I’ve lived a pretty easy life here on earth so far.  I’ve felt worse pain in dreams than I have when I’ve been awake.  There have been times in dreams when I’ve begged my sleeping self to let me wake up.  I know what’s going to happen next in the dream, and I don’t want to go there.  I don’t want to experience that, even though I’m lucid enough to understand that it is just a dream, and eventually I’ll wake up, unharmed.  I had never put that experience together with how Jesus must have felt in the Garden of Gethsemane before Bruce’s message.  I had never been able to understand before why Jesus prayed for His betrayal, crucifixion, and death to pass Him by.  But now it makes perfect sense because I’ve done that myself, in dreams.

This world we live in can seem so absolute, so lasting, so all-that-there-is, and yet that perception can change in the blink of an eye.  I’ve owned ducks a good share of my life, and one of the nightly rituals when you own ducks is going out every evening to give them fresh water and shut them into their shelter where they’ll be safe.  One evening, I went out to shut them in – exactly like I’d done every evening for years.  There was nothing different about it.  The gravel path crunched under my boots, the bucket in my hand swung against my leg, the flowers were sweet-smelling in the garden beside the fence.  And then, I saw that the ducks’ water container was not in their pen, but was outside, on the path.  One thing, one simple, impossible thing.  I had not taken that water container out, I never did.

I stood there, in complete shock for several minutes, my brain spinning.  If the water container was out, the only explanation was that I was not actually awake after all – I was asleep, and this was a dream.  But it was all perfectly, exactly real.  I kept looking around me, listening, touching, seeking something else that would demonstrate absolutely that my surroundings were false, but other than the water being where it could not be, all was a perfect replica of the waking world.  I was stunned; I literally did not know what was real anymore, I could not trust my mind, my senses, or my memory – all the things that I was used to leaning upon to tell me what was true.  I’d had lucid dreams before, but they always came with the realization that I was dreaming.  There had been no doubt.  This wasn’t like that.  I could not tell what was real, and it was world-shaking.  A perfect replica of the world, down to the last detail and ‘proven’ to exist by all my senses…and yet, not real, because that impossible water container was sitting there in front of me.

And then I woke up and had my proof in the waking.  And since then I’ve known that no matter what your senses tell you, no matter how real everything seems…it might not be so.  There might be something more real.  It’s disconcerting…and wonderful.

Whereupon he saith, Awake thou that sleepeth and arise from the dead, and Christ shall give you life.  Ephesians 5:14

This entry was posted in Life and tagged christianity, dreams, reality, truth. Bookmark the permalink.