While falling asleep last night, I got to thinking about a conversation I had with a friend.  She couldn’t really name any celebrity men she found attractive.  I kept coming up with names of guys I like, but she’d just shake her head.  We finally came up with one actor, but only in a specific role.

Last night, I got to thinking about mine, and I narrowed it down to four.  The Top Four, the only celebrity guys who always make me swoon no matter what role they’re in.  I always thought Ryan Gosling was at the top…turns out when I really think about it, he’s not.  Same with Jason Statham, David Tennant, and Alan Rickman – they are very near the top, but not quite at the top.

I even tried to come up with another guy, just so I could have a nice sensible five, but I couldn’t do it.   So who are these swoon-worthy men of mine?  In no particular order, they are: 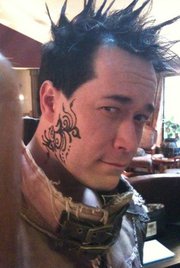 And once I had my short list, I got to wondering what is it, specifically, about these men that appeal to me so much.   It’s not their personal life or private personality, because I know absolutely nothing about Isaacs or Sheppard.  I don’t want to know, really.  Most of the time, celebrities disappoint me with their personal lives, so I make a point of not knowing anything.  I really don’t care who they vote for, or who they’re dating/married to, or what their favorite colors are.  When they aren’t on the screen, at a convention or other public event, or in some other way working, their lives are their business.   Not mine.

The exceptions are, of course, the celebrities who chose to open up sections of their personal lives and share with their fans.  Gaiman and Brown do this, and as a result, I know a very disproportionate amount about those two.  I know Gaiman raises bees and has two very handsome white German Shepherds.  I know who he’s married to, and I’ve grown to understand some of the reasons why they love each other.  I know Brown is very soft-hearted toward animals, and enraged and saddened by people who chose to be cruel.  I know he puts his family first, and I understand just enough of his childhood to know why that’s so very important to him.  So there are a few cases where I end up learning about a celebrity’s personal and inner life and find them admirable.  But that is definitely the exception, not the rule.  So that can’t be why they are on this list.

I’d say it’s their looks, except that in the case of Mark Sheppard, he’s not physically my ‘type’.  (A bit too short, a bit too bearded, a bit non-lanky.)  And there are *plenty* of men who absolutely fit my physical ideal who don’t even make the top 100.  So, after considerable thought, I’ve decided it comes down to a perfect mingling of two things: a certain twinkle in the eye, and that voice.

Yes.  The way to my heart is definitely through my ears.  And that’s why I included video clips…go listen….

So what about you?  Which celebrity men are you most attracted to, and why?