It’s so so so good, and hardly anyone I know is watching it, which makes me sad.  It deserves to be better known than it is.  It’s just…everything about it is spot-on perfect.  Perfect casting, perfect writing (the dialogue is particularly excellent) and it just has such heart.  I love how the show treats its characters, and how complicated they all are.

I’d seen Timothy Olyphant in a few things before, but he never really clicked with me until this role.  He just IS Raylan Givens.  I am a girl who does NOT like cowboys, or anything do with cowboys, so how in the world did I fall so hard for this show: 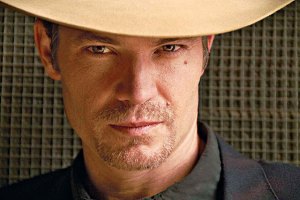 That’s a cowboy hat he’s wearing there, in case you can’t tell.  The show is basically a modern western, which should be anathema to me, but this show is so terrific that it doesn’t matter what genre it is.  It transcends.

It also doesn’t hurt that the brilliant actor Walton Goggins has one of the major roles.  I’ve been a fan of this guy since he played Shane on The Shield, and he’s no less fabulous here. 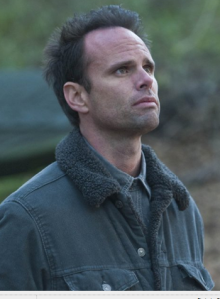 And then there is Jacob Pitts as Marshall Tim Gutterson.  I’ve never seen him in anything before, and he hardly registered with me on Season One of Justified.  But in Season Two, they finally let him out to play, and his few scenes made me laugh so hard.  He’s just such a deadpan oddball.  I hope he’ll get a lot more screen time in Season Three, because I completely adore Marshall Tim.   I wish I could find a video clip from the Season Two episode “Full Commitment” because it contains a couple of lines of the most perfect Tim TMI dialogue ever.  If there are any fans of the show reading this, I’m sure you know exactly what I’m referring to! 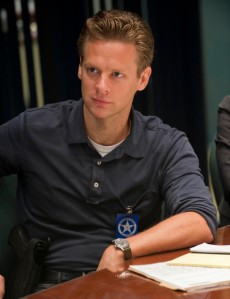 Joining the cast this season is another of my all-time favorite actors, Neal McDonough (him of the impossibly blue eyes!).  So happy to see he appears to be playing a very complicated bad guy.  Those are the best kind. 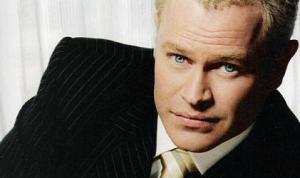 So if you are not watching this show, do yourself a HUGE favor and pick up season one.

PS: Thank you Tressa for telling me I had to watch this show!