No, the coop is not yet finished, but as the chicks will be spending their first weeks inside the house, we’re well on track for finishing by the time they need it.  We did add a decorative feature to the coop: curtains!

Pretty much all the major stuff that’s left to do on the coop is attach the doors and wire in the run.

Since it’s *possible* that the chicks could come as early as tomorrow (though most likely not until Weds), we set up their indoor quarters.  It’s an appliance box of some kind, with a lining of plastic, paper towels, and pine shavings.  We’re working on getting the temperature right, using the heat lamp.

The penultimate chicken breed we are getting is the Barnevelder. 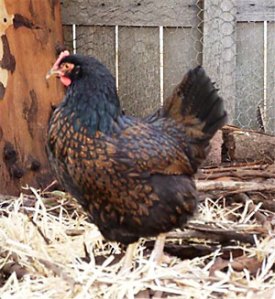 Here’s what My Pet Chicken has to say:

The Barnevelder originates from the Barneveld region of Holland where it is so well-known that, according to the Barnevelder Club of North America, the Barnevelder name is synonymous with the word chicken. It is sought after there for its dark “chocolate” brown eggs, and while Barnevelder eggs in this country have lost some of that dark pigment, breeders here are working hard to change that. This beautiful bird is hardy and quiet and doesn’t mind being confined. In short, it makes a wonderful pet!

It seems to be quite rare and quite loved in North America; every chicken breeder we speak to is delighted that we’re getting one. We’ve had a couple of people say it is their favorite chicken!  This is the one breed that we almost didn’t get.  There is only a limited number available, and at first we were told they were all sold out.

And here’s an egg: 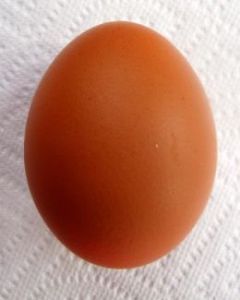 Hopefully we’ll get even luckier and get a hen that lays the really dark eggs.

7 responses to “Ready for Baby Chicks!”